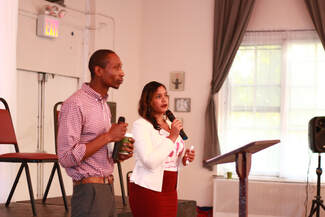 Thank you to everyone who joined us for the first annual justice conference for the From the Inside Out project. The inaugural event explored linguistics and popular language that is used as a means of dehumanization. We appreciate you for spending the day with us, and to the many who tuned in via livestream.  ​
Panel Discussions:
From the Inside Out’s panel discussions brought together experts in various fields to discuss fundamental questions about language and dehumanization. The first panel discussion was led by Tabaitha Rodriguez; Cristiana Grigore, Cory Greene, and Christine Licata were contributors. The first panel raised the question, “How does the language we use shape the relationships we forge?” as a starting point. The second panel was led by Chijundu Giovanni Obiofuma, and was comprised of Federica Coppola, Adelya Urmanche, and James Dunlea, entitled “Labels to misperceptions to punitive policy: what are the links?”
​
Research Presentations:
Researchers from the Center for Justice at Columbia presented cutting-edge work that explores From the Inside Out’s core mission: discovering how labels in various settings affect perceptions of people in prison. Pastor Isaac Scott, Adelya Urmanche, and Abigail Everett presented on their Label Impact study, which demonstrates the effects of punitive language on perceptions of people in prison, and how stereotypes in media like crime shows skew these perceptions, respectively. Federica Coppola, Dara Huggins, and Oh Prema presented the results of their Language and Humanization study. The study compared the effects of empathizing language about people on trial to typical punitive language used in the court system. From the Inside Out places great emphasis on creating and expanding a body of foundational, buildable research about people in prison.

Performances
Alongside research and group discussions, the conference engaged in strategic artistic outreach. Patricia Trusty of the Women’s Prison Association performed several spoken-word pieces, focused on redefining common identities. H.O.L.L.A. (How Our Lives Link Altogether) performed part of their album The Report-Back, which is part of their larger Healing Justice Movement. The evening concluded with a moving Spoken Pen performance from Pastor Isaac Scott, Jarrell Williams, Tyler Campbell, Gregary Griffin, and Carlos Ivan Calaff. The performers used a text written in collaboration by Kenneth Williams, Justin Anderson, Kenneth Reams and LaTavious Johnson, currently incarcerated on death row. The arts are a fundamental part of From the Inside Out project, giving artists an opportunity to share their lived experiences, and provide humanizing counternarratives about people in prison.

Breakout Sessions:
The conference hosted breakout sessions that facilitated empathetic, boundary-breaking discussion between attendees. With a diverse group of people from various walks of life in attendance, the breakout sessions provided a space for authentic and effective conversations to be had while reflecting on the information that was shared throughout the conference. The conversations allowed attendees to share information, personal stories and reflections that ultimately served to break stereotypes, and reframe the narratives surrounding individuals who have been affected by the criminal justice system. Session leaders asked participants to engage in the activities they offer to people in prison, including making art that explores how labels affect one’s sense of identity, providing an artistic, discussion-based companion to research presented earlier in the day. Facilitators included Alison Cornyn from Incorrigibles, Briana Baker from Justice for Black Girls, Ebony Walcott from Artistic Noise, Mario De La Cruz from Sarah Lawrence College, Marissa Anne Gutierrez-Vicario from Arte Justice, Annabel Manning and Michael Kelly from Jail Arts Initiative, and Anne Rice from Hudson Link. ​

The images, pictures, videos, and text on this website are copyrighted and may not be downloaded or reproduced. These materials may be used only for Educational Purposes. They include extracts of copyright works copied under copyright licences. You may not copy or distribute any part of this material to any other person. Where the material is provided to you in electronic format you may download or print from it for your own use, but not for redistribution. You may not download or make a further copy for any other purpose. Failure to comply with the terms of this warning may expose you to legal action for copyright infringement and/or disciplinary action.
The Confined Arts Program located at Columbia University and is a sponsored project of Fractured Atlas, a non‐profit arts service organization. Contributions for the charitable purposes of THE CONFINED ARTS must be made payable to “Fractured Atlas” and are tax‐deductible to the extent permitted by law